Here is the Guide for Leh Ladakh bike trip

If your bike is your first love and your lifelong companion, you must then take your beauty outside of the craziness of the city...
Read more
Technology

What Aspects Of Custom Mobile App Development Are There?

Introduction Custom mobile app development is the process of creating software applications for mobile devices such as smartphones, tablets, and other handheld devices. It entails...
Read more
Travel

Introduction If you are someone looking for some of the top fun places in Bangalore, then here is the list. Choose your pick and get...
Read more
Travel

Introduction The Kudremukh trek in the Western Ghats of India offers beautiful landscapes and challenging terrain and is ideal for adventure seekers and nature lovers....
Read more

UK mortgage approvals have dropped to their lowest level since the stringent lockdown of June 2020 as borrowing rates soared to an eight-year high.

Approvals for house purchases fell more than expected to 59,000 in October, compared with 66,000 in September, and came below the previous six-month average of 66,000,

the Bank of England said on Tuesday.

Economists polled by Reuters had forecast 60,200. Mortgage approvals were at their lowest level since spring 2020, the central bank said.

Its data showed the “effective” interest rate — the actual interest rate paid — on newly drawn mortgages had increased by 25 basis points to 3.09 percent in October

Samuel Tombs, chief UK economist at the consultancy PantheonPantheon Macroeconomics, said the rise was based on completed housing transactions, relating to mortgages agreed with lenders a few months ago and not incorporating the full extent of the recent increase in offered mortgage rates.

He said the average mortgage rate would probably soar to 6 percent at the start of 2023 and that mortgage approvals would continue to fall as the squeeze on real incomes intensified. He forecast that UK house prices would, as a result, fall 8 percent in the next 12 months. 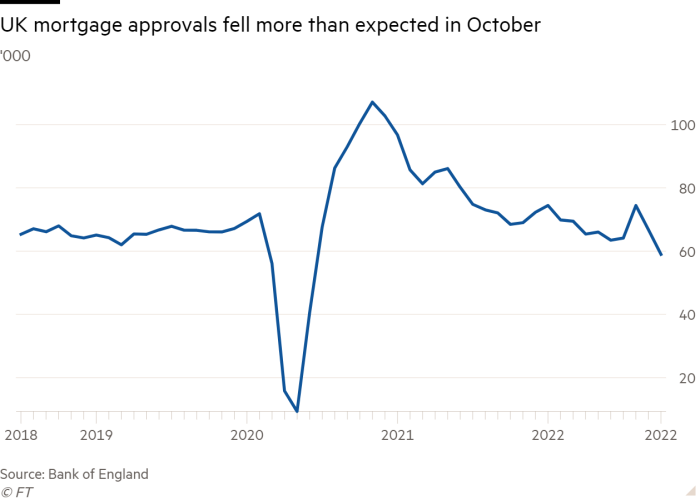 Ashley Webb, the UK economist at the consultancy Capital Economics, agreed. “Given we still think mortgage rates will average 5 percent in 2023, we expect a 12 percent peak-to-trough fall in house prices,” he said. Tom Bill, head of UK residential research at estate agent Knight Frank, said he expected house prices to drop about 10 percent over the next two years “as a new lending landscape emerges after 13 years of ultra-low rates”.

The property market is already showing many signs of weaknesses, with the average UK house price flatlining in September for the first time in almost a year.

Newer data from the mortgage provider Halifax showed house prices falling between September and October, the first drop since July 2021.

BoE data also showed that net borrowing of the mortgage debt by individuals declined month on month from £5.9bn to £4bn, the lowest level since November 2021 and well below analysts’ forecasts. 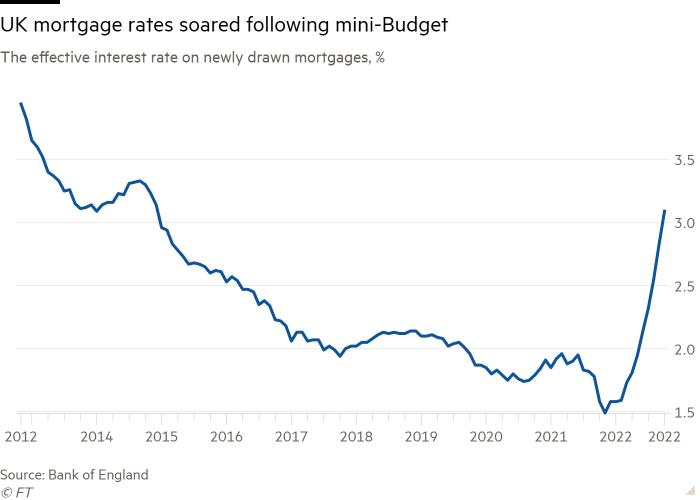 “It wasn’t until very recently that lenders began dropping rates following the BoE’s intervention and subsequent scrapping of the government’s most controversial proposals,” he added.

However, markets expect the BoE’s Monetary Policy Committee to raise the base rate, now at 3 percent, by another 50 basis points when it meets in December, and to continue increasing it to 4.6 percent next spring.

With high inflation and further rate rises set to add to the squeeze on household finances, Webb predicted that “housing market activity will fall sharply from here and real GDP will decline by 2 percent during a recession”.