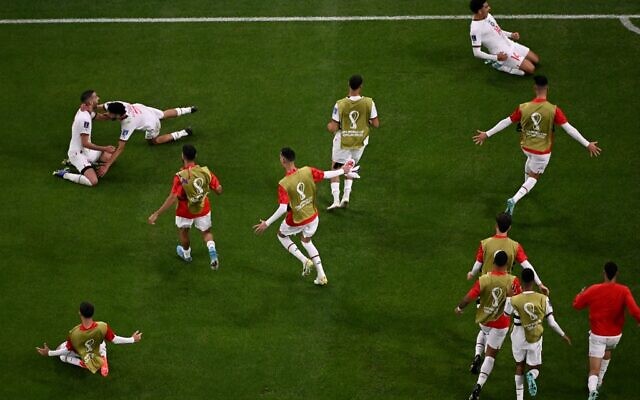 Morocco’s forward #14 Zakaria Aboukhlal (top, R) celebrates with teammates after he scored his team’s second goal during the Qatar 2022 World Cup Group F football match between Belgium and Morocco at the Al-Thumama Stadium in Doha on November 27, 2022. (Kirill KUDRYAVTSEV / AFP)

The Moroccan soccer team has won only its third-ever World Cup match, beating Belgium 2-0 in the latest upset of a soccer powerhouse in a tournament that has been chock full of them so far.

Second-half goals from Abdelhamid Sabiri and Zakaria Aboukhlal send Morocco to the top of Group F with four points, one ahead of Belgium. Canada plays 2018 runner-up Croatia later in the group’s other game.