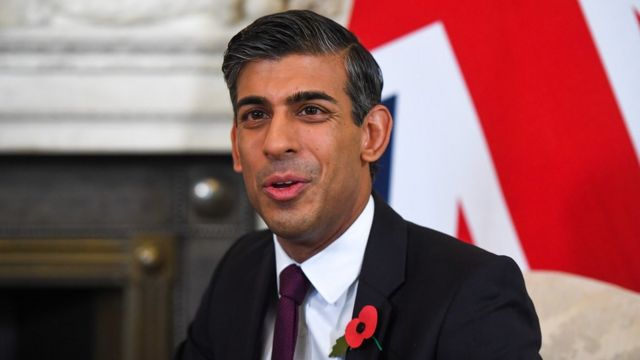 Rishi Sunak has told the G20 that Russia’s president, Vladimir Putin, should have been prepared to face world leaders at the summit, as Russia leaving Ukraine would make “the single biggest difference” to world affairs.

At the opening session of the summit, attended by Russia’s foreign minister, Sergei Lavrov, the British prime minister used his address to condemn the Ukraine invasion and the targeting of civilians and warned world leaders about the threat it posed to the international order.

“One man has the power to change all of this,” Sunak told the summit, which was also addressed by the Ukrainian president, Volodymyr Zelenskiy.

“It is notable that Putin didn’t feel able to join us here. Maybe if he had, we could get on with sorting things out.

“Because the single biggest difference that anyone could make is for Russia to get out of Ukraine and end this barbaric war.”

In a veiled remark about those nations that have remained neutral on the conflict, including China and India, Sunak said that all countries were in greater danger because of the precedent that had been set.

“Russia’s illegal invasion of Ukraine has profound implications for us all, because it has undermined the fundamental principles of sovereignty and territorial integrity,” he said.

“We all depend on these principles. They are the foundations of the international order. They must be upheld.

“It is very simple – countries should not invade their neighbours, they should not attack civilian infrastructure and civilian populations and they should not threaten nuclear escalation. Surely these are things on which we can all agree.”

Sunak also used his intervention to call for an end to the grain crisis.

“The weaponisation of energy and food is totally unacceptable,” he said. “Two-thirds of Ukraine’s grain goes to developing countries, yet Russia has destroyed grain stores and blocked shipments.

“It is harming the most vulnerable people around the world. And this has nothing to do with sanctions. All of us should support the secretary general’s efforts to get the Black Sea grain initiative back on track.”

Russia’s presence has cast a shadow over the summit and put states at an impasse over a final communique, which is likely to contain only weak resolutions on the economy and digital issues because of the inability of the G20 to agree a statement that would condemn Moscow’s aggression or pin the blame for economic turmoil on the Kremlin’s war in Ukraine.

But No 10 has also said there is a widespread feeling that Russia’s presence should not be allowed to stymie all progress and that some words are likely to be agreed on the importance of stability in the global markets.

The summit is taking place in the days after extraordinary Ukrainian military advances, including retaking the strategically important city of Kherson.

In his address, Zelenskiy spoke to what he termed “the G19” – excluding Russia deliberately – and compared the victory in Kherson to the turning point in WWII. “It is like, for example, D-Day — the landing of the allies in Normandy,” he said.

“I want this aggressive Russian war to end justly and on the basis of the U.N. Charter and international law,” Zelenskiy said. “Ukraine should not be offered to conclude compromises with its conscience, sovereignty, territory and independence. We respect the rules and we are people of our word.”

… we have a small favour to ask. Millions are turning to the Guardian for open, independent, quality news every day, and readers in 180 countries around the world now support us financially.

In these perilous times, a truth-seeking global news organisation like the Guardian is essential. We have no shareholders or billionaire owner, meaning our journalism is free from commercial and political influence – this makes us different. When it’s never been more important, our independence allows us to fearlessly investigate, challenge and expose those in power.