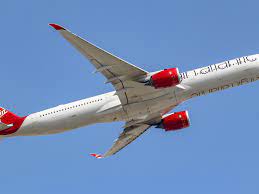 Boss Gareth Southgate and skipper Harry Kane will lead the 26-strong squad on board “Rain Bow”, a Virgin Atlantic A350 Airbus.

It features a motif of Oscar — the airline’s LGBTQ+ Union Jack-trailing flying icon — beneath the cabin.

The gesture was proposed by FA chiefs keen to register concern about gay rights in the strict Muslim state where homosexuality can still carry the death penalty.

Southgate has vowed to make a stand.

He said: “We’re very strong on inclusivity. We understand the challenges that this tournament brings . . . the human rights challenges.”

It was “highly unlikely”, he said, that he would follow Fifa’s guidance to focus solely on football during the Cup.

He said: “We’ve always spoken about issues we think should be talked about, particularly ones we feel we can affect.”

Kane has already shown support for the LGBTQ+ community by wearing a rainbow armband while playing for his club, Spurs.

The players gathered today at St George’s Park, the home of England teams in Burton-on-Trent, Staffs, ahead of the seven-hour flight on Rain Bow to Doha, Qatar’s capital.

It was chartered for the sole use of the team, backroom staff and FA officials and has 44 upper class, 56 premium and 235 economy seats.

The plush jet has a social space called The Loft where players can “meet and mingle”.

A Three Lions insider said: “It’s no coincidence this particular plane was chosen It perfectly illustrates the concerns of the England party and those of every civilised nation taking part in the tournament.

Fifa, which awarded the World Cup to Qatar, despite its human rights record, may try to ban future “political” gestures by teams.

More are expected, however, and the USA rainbow colours into their team badge at their Qatar training base.