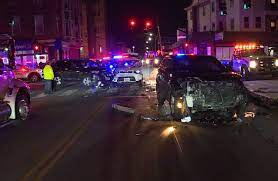 Police officer Rab Nawaz Khan said the morning attack in the Dadewala area of Lakki Marwat district came during a routine patrol in a suburban area. The attackers escaped on motorcycles.

Pakistani Taliban claimed responsibility for the attack. Islamic militants had been involved in previous attacks on security forces.

Mohammad Khurasani, who said he is a spokesman for the Pakistani Taliban, formally known as Tehreek-e-Taliban Pakistan or TTP, said in a statement that the patrol was ambushed on the way to a raid and the attackers acquired five police weapons from the confrontation. Khan said reinforcement has reached the scene, moved the bodies to a hospital and started an investigation to find the perpetrators.

Northwestern Khyber Pakhtunkhwa province of Pakistan borders Afghanistan and has seen Islamic militants largely known as Pakistani Taliban operate in the area for many years.

The Pakistani Taliban are a separate group, but they are allies of the Afghan Taliban, who seized power in Afghanistan more than a year ago as U.S. and NATO troops were in the final stages of their pullout.

The Taliban takeover in Afghanistan has emboldened the Pakistani Taliban. Although the Taliban in Afghanistan have encouraged Islamabad and the TTP to reach a peace agreement through dialogue, talks amid a ceasefire between the two sides that started in May proved futile.