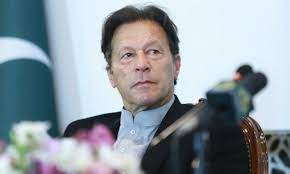 An Islamabad district and sessions court on Tuesday adjourned the hearing of a Toshakhana reference against PTI chief Imran Khan till December 8 after recording a district election commissioner’s statement.

Imran — who is recuperating after sustaining a gunshot wound following an assassination bid during a rally on November 3 — was expected at the court today as the summons for his appearance was issued during the previous hearing, which marked the beginning of a criminal trial against the former prime minister for concealing information about the Toshakhana gifts.

The proceedings were initiated on the Election Commission of Pakistan’s (ECP) complaint after the electoral watchdog found him guilty of “false statements and incorrect declaration” in his election papers.

The district election commissioner said he had been authorised to pursue the case.

He added that the ECP was an independent institution that functioned under the Constitution and ensured that corrupt practices were curtailed.

Malik further said members of the National Assembly submitted their returns to the ECP annually. Imran, too, submitted his returns from 2018 to 2021, he added.

The hearing was adjourned till December 8.

A copy of the court’s written order with regard to today’s proceedings is awaited.

The court summons for Imran comes a month after the ECP found Imran had made “false statements and incorrect declaration” in his election papers and disqualified him.

Last week, the ECP had sent the reference to the court, asking it to proceed against Imran under criminal law for allegedly misleading officials about the gifts he received from foreign dignitaries during his tenure as the prime minister. The commission seeks a three-year jail term and imposition of fine as the punishment.

The complainant in the reference is the Islamabad deputy election commissioner. The reference stated that Imran had “deliberately concealed his assets relating to Toshakhna gifts retained by him particularly in year 2018 and 2019… in the statements of assets and liabilities filed for the year 2017-201 8 and 2018-19”.

It further said that as per the record, the gifts were purchased from the Toshakhana for Rs21.5 million on the basis of their assessed value, while they were valued at around Rs108m.

The ECP wanted the PTI chief to be convicted for the offences mentioned under sections 167 (corrupt practice) and 173 (making or publishing a false statement or declaration) of the Elections Act 2017.

The reference was filed in August against Imran by the coalition government, for “not sharing details” of Toshakhana gifts and proceeds from their alleged sale. Lawmakers from the Pakistan Democratic Movement — the ruling alliance — had submitted the reference to NA Speaker Raja Pervaiz Ashraf, who had subsequently forwarded it to Chief Election Commissioner (CEC) Sikander Sultan Raja for further action.

Established in 1974, the Tosha­khana is a department under the administrative control of the Cabinet Division and stores precious gifts given to rulers, parliamentarians, bureaucrats, and officials by heads of other governments and states and foreign dignitaries.

According to Toshakhana rules, gifts/presents and other such materials received by persons to whom these rules apply shall be reported to the Cabinet Division.

However, the PTI, while in government, had been reluctant to disclose details of the gifts presented to Imran since he assumed office in 2018, maintaining that doing so would jeopardise international ties, even as the Pakistan Infor­mation Commission (PIC) ordered it to do so.

But later, in a written reply submitted to the ECP on September 8, Imran had admitted to selling at least four presents he had received during his tenure as the prime minister.

The former premier, in his reply, had maintained that the sale of the gifts that he had procured from the state treasury after paying Rs21.56 million fetched about Rs58m. One of the gifts included a graff wristwatch, a pair of cuff links, an expensive pen and a ring while the other three gifts included four Rolex watches.

In their disqualification reference, MNAs from the ruling alliance included documentary evidence to corroborate their claims against the ex-premier and sought his disqualification under Sections 2 and 3 of Article 63 of the Constitution, read with Article 62(1)(f).

Article 62(1)(f) says: “A person shall not be qualified to be elected or chosen as a member of Majlis-e-Shoora (Parliament) unless […] he is sagacious, righteous and non-profligate, honest and ameen, there being no declaration to the contrary by a court of law.”

Article 63(2) says: “If any question arises whether a member of Majlis-e-Shoora (Parliament) has become disqualified from being a member, the Speaker or, as the case may be, the Chairman shall, unless he decides that no such question has arisen, refer the question to the Election Commission within thirty days and should he fail to do so within the aforesaid period it shall be deemed to have been referred to the Election Commission.”

While, Article 63(3) reads: “The Election Commission shall decide the question within ninety days from its receipt or deemed to have been received and if it is of the opinion that the member has become disqualified, he shall cease to be a member and his seat shall become vacant.”

Last year, the PIC had accepted an application by Islamabad-based journalist Rana Abrar Khalid and directed the Cabinet Division to “provide the requested information about the gifts received by [then] prime minister Imran from foreign head of states, head of governments and other foreign dignitaries … description/specification of each gift, information about the gifts retained by the PM and the Rules under which gifts thus received are retained by him”.

The Cabinet Division was told to share the required information within 10 working days and upload it on the official website as well.

Subsequently, the Cabinet Division had challenged the PIC order in the IHC, claiming that it was “illegal, without lawful authority”. The then-government took the stance that the dis­closure of any information rela­ted to Toshakhana jeopardises international ties.

In April this year, the IHC had directed Deputy Attorney General Arshad Kayani to ensure the implementation of the PIC order to publicise details of the gifts presented to former prime minister Imran by heads of states since he assumed office in August 2018.