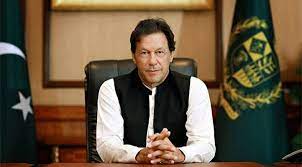 PTI chief urges supporters to reach Rawalpindi on Nov 26, set to announce next strategy
Says if the establishment wasn’t behind regime change, should have stopped conspiracy

LAHORE: Pakistan Tehreek-i-Insaf (PTI) Chairman Imran Khan on Saturday urged his supporters to converge on Rawalpindi on Nov 26 for the long march that he is expected to rejoin in person after recovering from the injuries he sustained in a gun attack in Wazirabad earlier this month. For now, the march was suspended in Rawat.

He also appears to have had a change of heart for the military that he has consistently blamed for ousting him from power, when he said if the establishment wasn’t behind the regime change it should have played its role in stopping the conspiracy.

Mr Khan must have strategically chosen Nov 26 for entering the twin cities to resume his long march as the next army chief would be inducted just a couple of days after that when the tenure of the incumbent Gen Qamar Javed Bajwa ends on the 29th.

“I will welcome people from across the country in Rawalpindi next Saturday at 1pm and announce the next protest strategy for the ‘Haqeeqi Azadi’ long march until every citizen is empowered to get their due rights,” he announced and stressed that the nation should not stay neutral at this “defining moment”.

The PTI chief also called upon the powers that be to discharge their duty to save the nation from heading towards a disaster. “The only way to get rid of the looming economic and political mayhem is to hold free, fair and credible general elections at the earliest,” he stressed.

Mr Khan also claimed the ruling coalition’s performance showed it had no plan to control the nose-diving economy.

Adopting a lenient tone for the establishment, the PTI chief said “if we accept the establishment was not behind the regime change conspiracy, it should have played its role and stopped the plot, as it knew well about the background of the corrupt and looters”. He added that no regime change conspiracy could be successful “without support from within”.

He then went on to pose some questions to the establishment, asking what prompted it to “bring back and impose the thieves and corrupt” on the nation even after ousting them twice in the past on the same corruption charges?

“The establishment should also tell whether the regime change benefitted the country,” he said, adding he believed the “illegally installed” government only worked to push the PTI against the wall and get its corruption cases closed.

He alleged he continued to face threats to his life, but launched the long march to rescue the nation from the shackles of slavery and ensure every citizen enjoyed their rights, progressed and prospered.

He said the government had constituted a commission to probe the killing of Arshad Sharif, but the journalist’s mother had expressed distrust over it.

The PTI chief said he too was facing discrimination as he could not get an FIR registered against the three individuals he had nominated for the attempted assassination. “The police working under the PTI-PML-Q Punjab government is afraid to name ‘Dirty Harry’ in the FIR,” he regretted.

In a statement reported by the APP, she said the end of Mr Khan’s long march would not be different from that of the 2014 protest. “Imran Khan! It is over for you,” she tweeted, adding that instead of urging his workers to reach Rawalpindi on Nov 26, the PTI chief should have announced the date for filing cases over the Toshakhana scandal.