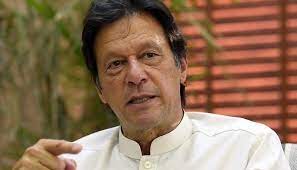 ISLAMABAD: Prime Minister Imran Khan on Wednesday claimed to have a “surprise” up his sleeve for the opposition and expressed confidence that he would emerge victorious in the “no-confidence match” against his opponents.

Exclusively talking to ARY News, the former prime minister said he will intensify his movement against the political opponents. ‘Will politically fight against opponents at every forum’, he was quoted as saying.

We will continue our political movement under the boundaries of the land of the law, Imran Khan said.

Responding to a question, Imran Khan said he will not accept any ‘lollipop’ and demanded an immediate announcement of general elections in the country.

Sources privy to the development said, the ousted prime minister again expressed his reservations on the ECP and reportedly warned the Election Commission of Pakistan to refrain from becoming a ‘wing’ of a political party.

The premier made these remarks while speaking to a group of journalists in Islamabad, just two days before the National Assembly (NA) session summoned to begin deliberations on the joint opposition’s resolution seeking his ouster begins.

Despite him being in a highly precarious position following the emergence of a number of dissidents in his party and his allies increasingly hinting on teaming up with the opposition, the prime minister warned the opposition that it “will be shocked by the loss of voters on their side”.

“The opposition has already shown all their cards,” he said, adding: “They are in for a big surprise.”

PM Imran asserted that he would not tender his resignation and in reply to a subsequent question, he said: “Should I give up under the pressure of thieves even before the fight is over?”

“It may be someone’s misconception that I will sit at home,” he remarked, making it clear that he did not plan on stepping down as the country’s chief executive.

During the meeting, the prime minister also revealed that he had met estranged PML-N leader Chaudhry Nisar Ali Khan, saying that both had an association that went back 40 years.

The prime minister’s statement has come days before the initiation of proceedings on the joint opposition’s no-confidence motion filed against him in the NA earlier this month. The move by the opposition — primarily the Pakistan Democratic Movement (PDM) and PPP — followed days of political maneuvering on the part of the ruling Pakistan Tehreek-i-Insaf (PTI’s) and its opponents after PDM chief Maulana Fazlur Rehman formally announced last month the plan to submit a no-trust motion against the premier.

Both sides stepped up efforts to gain the support of the PTI’s allies, whose votes are of significance in deciding the prime minister’s fate. Meanwhile, they also traded bards and there were allegations of horse-trading against the opposition and episodes of violence which opposition parties claimed were perpetrated on PTI leaders’ behest in a bid to keep dissident members from voting on the no-confidence resolution.

To show their strength, both sides also announced that they would hold power shows in the capital, with the PTI set to stage a public meeting in Parade Ground on March 27.

During his interaction with media persons today, PM Imran said his party’s rally would be a “historic gathering”.

‘Army should not be maligned for politics’

The premier said the country’s armed forces were its “most precious asset” and that Pakistan would have disintegrated into three parts had it not been for the army.

Underlining the significance of the military for the country, he stressed that “no one should malign the institution for the sake of politics.”

Speaking about the opposition parties, he called PDM chief Fazlur Rehman a “12th man” — a term used in cricket for a player who is not a part of the playing eleven but is used as a substitute if another player is injured or if drinks are needed to be carried.

Criticising the PML-N and PPP, the premier said their politics was about “concealing their thefts”.