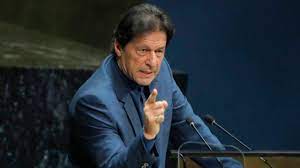 Chairman Pakistan Tehreek-e-Insaf (PTI) Imran Khan has said that he has prepared a ‘surprise’ for his opponents on November 26, ARY News reported.

PTI Chief on Sunday had a meeting with some journalists and talked about his strategy for the upcoming rally in Rawalpindi on November 26. The former premier said that he would ‘surprise’ everyone on the day.

Imran Khan said that he has no objection to whoever becomes the next Chief of Army Staff (COAS). The PDM government has been trapped from all directions, they would lose badly if they call for elections and the country would default if they don’t, he added.

The PTI Chief added that the PDM government has sent messages to them via President Arif Alvi. His only demand is a free and fair election, they can talk on other issues once the date for the elections is announced, he added.

He added that despite using all the state machinery the PDM could not find anything other than the Tosha Khan gift watch. The PTI Chief said that he is sure the gift watch propaganda would be exposed in the court.

He added that Shehbaz Sharif has been trapped in London court as well, looks like he would resort to an out-of-court settlement there too.