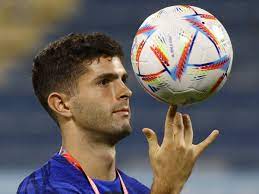 Christian Pulisic has said the USA plan to change perceptions at the World Cup, acknowledging that a positive tournament in Qatar will help other nations take them more seriously.

The Americans face England, Iran and Wales in Group B and after not qualifying for the last finals are determined to make their mark. The Chelsea forward also reiterated the USA’s support for the LGBTQ+ community, saying they want to “be the change”, the team’s motto.

Pulisic said the USA, who face Wales in their opening game on Monday, are setting out to change the script. Asked if the finals provided a chance to change opinions, Pulisic replied: “Absolutely, that’s what we’re here to do.

“Maybe it hasn’t been the top sport back in the States and we want to change the way that the world sees American soccer – it’s one of our goals. We haven’t been at the level of some of these world powerhouses in recent decades, but we’ve had good teams with a lot of heart. We can take it to the next step – a successful World Cup would change a lot.”

his is a World Cup like no other. For the last 12 years the Guardian has been reporting on the issues surrounding Qatar 2022, from corruption and human rights abuses to the treatment of migrant workers and discriminatory laws. The best of our journalism is gathered on our dedicated Qatar: Beyond the Football home page for those who want to go deeper into the issues beyond the pitch.

Guardian reporting goes far beyond what happens on the pitch. Support our investigative journalism today.

Pulisic, who could be named captain by head coach Gregg Berhalter, has made three Premier League starts for Chelsea this season, the last of which came in defeat at Brighton in October. Despite the lack of action, he is happy with his form and feeling “really strong” heading into the tournament. The 24-year-old said he was optimistic about Chelsea’s future under Graham Potter, who replaced Thomas Tuchel in September.

“He’s been good,” Pulisic said. “He’s come in and the way he’s worked with the players and communicated with the players has impressed me the most. We had a great start with him. We’ve had some difficulties in recent weeks but I think he’s working through it and I think the guys have received him quite well. We’re excited. There’s going to be good things going forward.”

The USA have decorated their training ground in Al Gharaffa, team hotel and fan-zone areas with the rainbow-themed logo to show support for the LGBTQ+ community. Same-sex relationships are illegal in Qatar and the host country has also warned against public displays of affection.

“I think we have established our message as a team, over and over,” said Pulisic, confirming the squad have discussed the subject. “We want to be the change. We have been clear on that. That’s what we are looking for.”

Asked how they intended to do so in Qatar, Pulisic replied: “I think we’ve been pretty clear with our messaging and that’s all I want to say on it.”

… we have a small favour to ask. Millions are turning to the Guardian for open, independent, quality news every day, and readers in 180 countries around the world now support us financially.

In these perilous times, a truth-seeking global news organisation like the Guardian is essential. We have no shareholders or billionaire owner, meaning our journalism is free from commercial and political influence – this makes us different. When it’s never been more important, our independence allows us to fearlessly investigate, challenge and expose those in power.