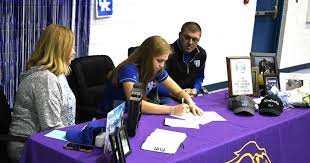 The name Cathryn Brown will be known among the high school golf community for years to come, and after signing to play for the University of Kentucky, that name will spread much further.

“I can’t put this into words, it’s just so exciting,” Brown said. “This is a moment in my life that I’ve been waiting for since Cullan decided to go to UK and I knew that’s where I wanted to go as well.”

Her late brother Cullan Brown is also a name that will not soon be forgotten in the golf community, not only in western Kentucky but also at UK.

Brown is coming off of a senior season that caps off her high school career well. She finished with state runner-up honors in the KHSAA State Championship, along with several tournament wins. She was also named to the All-Region Team and First-Team All-State by the Kentucky High School Golf Coaches Association.

She admits that while she had found success in the past few years, she didn’t think she would be at this point looking back on her freshman year, because just like anyone else, she has had her fair share of golf ups and downs.

“My freshman year, I was still hooked on basketball, but being here and having my dreams come true is just so surreal,” she said.

Brown is joining a talented group of Wildcat golfers. The team most recently posted a No. 1 finish in the Ruth’s Chris Tar Heel Invitational with a 4-under-par 860 on Oct. 18.

While she still has the rest of her senior year of high school to finish out, she will continue to hone her golf skills in preparation for her first college season.