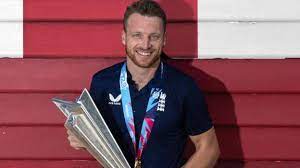 Captain Jos Buttler says England’s “competitive juices will get going” despite having to start a one-day series against Australia four days after winning the T20 World Cup.

England lifted the trophy in Melbourne on Sunday and now play three ODIs, starting in Adelaide on Thursday.

“It’ll be a challenge having had such a high a few days ago,” said Buttler.

“We can just go into it and try to really enjoy the games and play with lots of freedom.”

Buttler’s England team-mate Moeen Ali said the timing of the series – England’s last white-ball matches of the year – is “horrible”.

“Once you get over the line and are playing against Australia, I’m sure the competitive juices will get going.”

Seven of the England XI that played in the T20 final victory over Pakistan are in the ODI squad.

Dawid Malan – who missed the knockout stages with a groin injury – is fit, while opener Jason Roy returns after being dropped before the World Cup for poor form.

“To have some fresh and fantastic players coming, wanting to stamp their mark, has been one of the biggest strengths of white-ball cricket in England for a while,” added Buttler.

“The depth of talent is fantastic and that drives standards and pushes people on.”

In winning the T20 World Cup, England became the first men’s team to hold the 20-over and 50-over world titles at the same time.

“There’ll obviously be some pretty different conditions in India next year,” said Buttler. “It’s important to quickly focus on that, to get in a good position so that when we arrive in India we will have a chance of trying to win the trophy.”

For Australia, this will be the first ODI series under new captain Pat Cummins, the Test skipper having replaced Aaron Finch, who retired from one-day internationals in September.

Australia were the defending champions at the T20 World Cup but went out in the group stage and Cummins said this series will give his side an indication of how they match-up against the best white-ball team on the planet.

“England have been the standard for the last four or five years,” said Cummins.

“They’ve got some class players who’ve played well and done well against Australia in particular. It’s always a good way of judging where you’re going as a team as well – coming up against the best.”

Meanwhile, England’s first Test against Pakistan is still planned for Rawalpindi despite contingency talks being held over the venue.

There have been discussions about the possibility of moving the match because of political unrest after former prime minister Imran Khan was shot at a protest march.