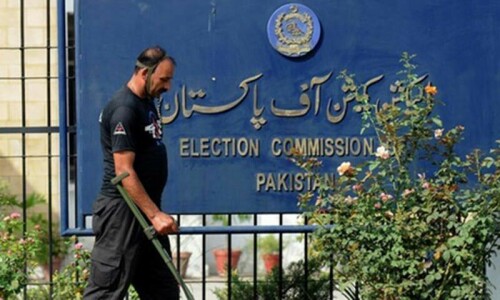 The Election Commi­ssion of Pakistan (ECP) on Tuesday announced that local government elections in Karachi and Hyderabad will be held on January 15, 2023.

A five-member bench headed by Chief Election Commissioner Sikandar Sultan Raja issued the orders. The electoral watchdog had earlier reserved its verdict on the plea on November 15.

Local government elections in the two divisions were originally scheduled for July 24, but have been put off thrice since then, primarily because of the Sindh government’s request that it didn’t have the required police officials, who were busy with flood relief operations.

The polls were first put off to Aug 28, then to Oct 23, and then indefinitely, before the Sindh government on Nov 10 said it had postponed the polls on its own for 90 days prompting criticism from the PTI and Jamaat-i-Islami (JI).

In the ruling issued today, a copy of which is available with goodnewsetc, the ECP ordered the Sindh government, chief secretary, and inspector general to provide a sufficient number of security personnel for election duty at the polling stations, offices of district returning officers, returning officers (RO), polling staff, and transportation of polling material to and from the offices of the ROs.

“Further, the federal government through the secretary of the interior ministry is directed to provide a sufficient number of security personnel from other law enforcement agencies,” it stated.

Today’s development comes days after the Sindh High Court (SHC) had instructed the electoral watchdog to issue the schedule for local body elections in Karachi and Hyderabad within 15 days, adding that the polls should preferably be conducted within 60 days.

The orders were issued on the pleas of PTI and Jamaat-e-Islami (JI). During the hearing, the SHC Chief Justice Ahmed Ali M. Shaikh had directed the government to ensure that requisite assistance was rendered to the electoral watchdog while the provincial chief secretary and the inspector general were told to ensure that “any preparatory or organisational steps” were taken in advance.